The following items are now available for checkout at Gilmer Public Library: 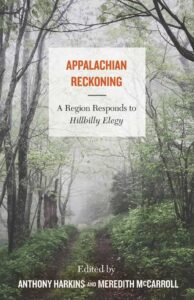 A review from Goodreads.com notes:

With hundreds of thousands of copies sold, a Ron Howard movie in the works, and the rise of its author as a media personality, J. D. Vance’s Hillbilly Elegy: A Memoir of a Family and Culture in Crisis has defined Appalachia for much of the nation. What about Hillbilly Elegy accounts for this explosion of interest during this period of political turmoil? Why have its ideas raised so much controversy? And how can debates about the book catalyze new, more inclusive political agendas for the region’s future?

Appalachian Reckoning is a retort, at turns rigorous, critical, angry, and hopeful, to the long shadow Hillbilly Elegy has cast over the region and its imagining. But it also moves beyond Hillbilly Elegy to allow Appalachians from varied backgrounds to tell their own diverse and complex stories through an imaginative blend of scholarship, prose, poetry, and photography. The essays and creative work collected in Appalachian Reckoning provide a deeply personal portrait of a place that is at once culturally rich and economically distressed, unique and typically American. Complicating simplistic visions that associate the region almost exclusively with death and decay, Appalachian Reckoning makes clear Appalachia’s intellectual vitality, spiritual richness, and progressive possibilities.

NEW TO OUR LIBRARY:

Cleo - The Cat Who Mended a Family, by Helen Brown

Ruhlman's How to Roast, by Michael Ruhlman

The Homemade Chef, by James Tahhan

Imagine It Forward: Courage, Creativity and the Power to Change, by Beth Comstock

The Bird Sisters, by Rebecca Rasmussen

The Fix, by David Baldacci

A Journey by Chance, by Sally John

After You, by Jojo Moyes

I Hate Everyone But You, by Gaby Dunn & Allison Roskin

The Music of What Happens, by Bill Konigsberg

Child of the Wolves, by Elizabeth Hall

The Sea of Trolls, by Nancy Farmer

The Wild Magic Trilogy - Book One: Begone the Raggedy Witches, by Celine Kiernan

Jenny of the Tetons, by Kristiana Gergory